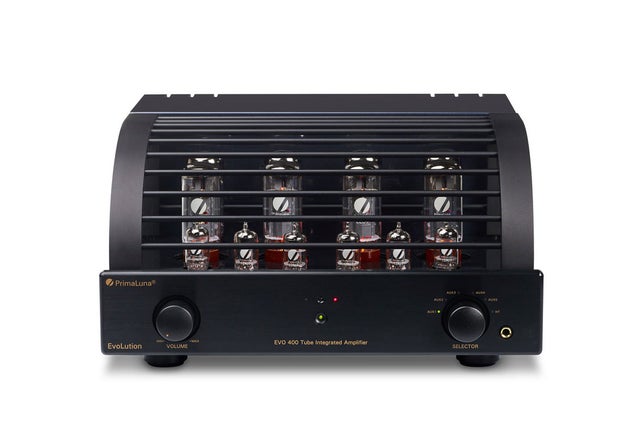 The number one problem people face when adding a subwoofer is integration to the main speakers. When you run the subwoofer at “line level” while your main speakers are hooked up to the amplifier, the signals have a different character or “transfer”. That’s why REL, the premier manufacturer of subwoofers, prefers using a “Speakon” connector hooking up their subwoofers to the same terminals the speakers are hooked up to. Now both speakers and sub get the same “flavor” and are easier to integrate together. In addition, most integrated amps have a subwoofer out that is not as robust as using the line out from a preamp. The result? Reduced dynamics.

But there are some very good subwoofers that only have an RCA line-level input. That’s why the subwoofer out on the EVO300 and 400 integrated amplifiers are transformer coupled.
​
Switchable from stereo to mono, we run right off the speaker taps of our amazing wide-bandwidth output transformers to a voltage-divider network and lower output to line level. Now your subwoofer and speakers are seeing the exact same signal, singing the exact same tune, for perfect coherence. PLUS you get the benefit of increased dynamics. No other brand offers this feature. Only PrimaLuna. 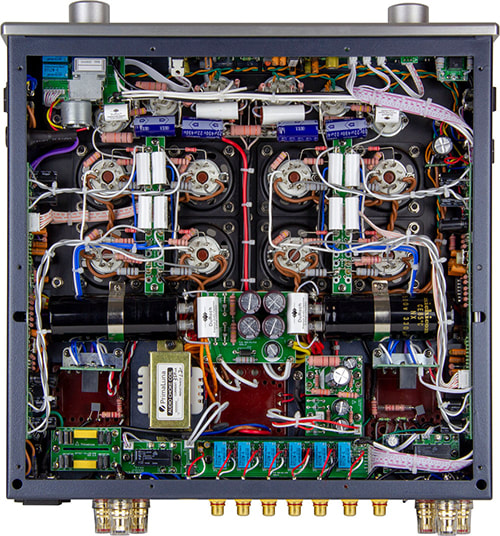 Power transformers generate two types of noise, magnetic and acoustic. That's why toroidal power transformers are used in the very best audio products. Compared to standard transformers, toroids radiate about 1/10 the magnetic field that pollutes music and obscures detail. Additionally, the absence of an air gap typically means toroids have an 8:1 reduction of acoustic noise. As transformers are the most expensive components in any audio product, manufacturers will even house cheaper C-core and EI-core transformers in an outboard power supply box with an umbilical cable rather than upgrade to an expensive toroid. The increased cost is significant, but PrimaLuna doesn’t cut corners. All PrimaLuna products use massive, potted toroidal transformers. PrimaLuna transformers are enclosed in a metal housing and then potted in a non-microphonic resin to further reduce noise and to protect the windings from moisture and deterioration forever.

Tube life is simply a matter of how hard you run the tubes. That’s it. The only way to extend tube life is to run them as close to zero as you possible can, making sure it is not so low you go into crossover distortion. The life of a tube will depend on two things: Plate and screen voltage.

If the plate and screen voltage is high, you are more likely to get tube shorts when you turn the amp on and you get cathode stripping which greatly effects the cathodes ability to spit out electrons. Manufacturers that run the hell out of tubes to pump up their power ratings will never tell you what voltages they use. They’ll say it’s “proprietary” as if it’s some secret sauce. There is no such thing. But if they told you that they used 575, 600, or even 625 volts you probably wouldn’t buy. We proudly tell you our tubes run at just about 417 volts for the plates and screens.

PrimaLuna runs their output tubes at a minimum dissipation without going into crossover distortion. When you look at our amps, they provide less power from each tube. With KT-120’s as an example, a PrimaLuna will give you only 21 watts per tube. So running a pair of them you get 42 watts. That’s a lot of power, but the demands per tube are a fraction of some manufacturers that give you 100 watts from a pair of KT-120’s. It’s a cheap way to get big power, and it’s cheap. In fact, free. To get more power the right way is expensive. It requires bigger transformers, sockets, wiring, resistors, capacitors, and the tubes to do it. Which is exactly what PrimaLuna did. But we didn’t stop there.
​
Read this carefully: Power has nothing to do with sound quality. Or bass slam. You can buy a 200 watt receiver for $299, and it will even have surround sound. Do you think for a minute it will sound better than a 50 or 100 watts high end amp costing $10,000? Of course not. Only first-time buyers think that way. Experienced audiophiles know that for the majority of listening sessions, you use maybe 10 watts of power.
With PrimaLuna, you get to choose. Go for it. 6L6G, 6L6GC, 7581A, EL34, EL37, 6550, KT66, KT77, KT88, KT90, KT120, even the monstrous KT150. A future-proof design, PrimaLuna is compatible with NEW tube types not even thought of today!