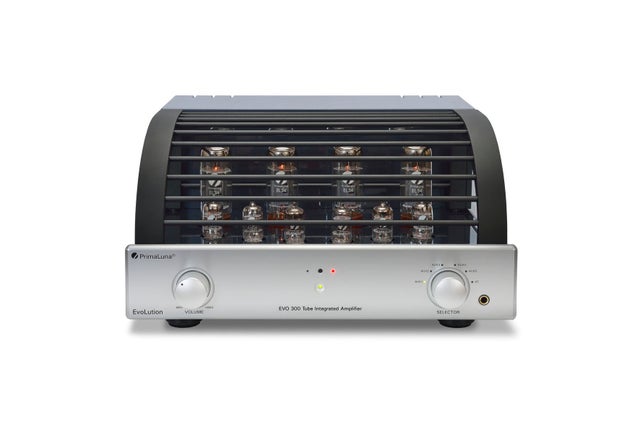 The number one problem people face when adding a subwoofer is integration to the main speakers. When you run the subwoofer at “line level” while your main speakers are hooked up to the amplifier, the signals have a different character or “transfer”. That’s why REL, the premier manufacturer of subwoofers, prefers using a “Speakon” connector hooking up their subwoofers to the same terminals the speakers are hooked up to. Now both speakers and sub get the same “flavor” and are easier to integrate together. In addition, most integrated amps have a subwoofer out that is not as robust as using the line out from a preamp. The result? Reduced dynamics.

But there are some very good subwoofers that only have an RCA line-level input. That’s why the subwoofer out on the EVO300 and 400 integrated amplifiers are transformer coupled.

Switchable from stereo to mono, we run right off the speaker taps of our amazing wide-bandwidth output transformers to a voltage-divider network and lower output to line level. Now your subwoofer and speakers are seeing the exact same signal, singing the exact same tune, for perfect coherence. PLUS you get the benefit of increased dynamics. No other brand offers this feature. Only PrimaLuna. 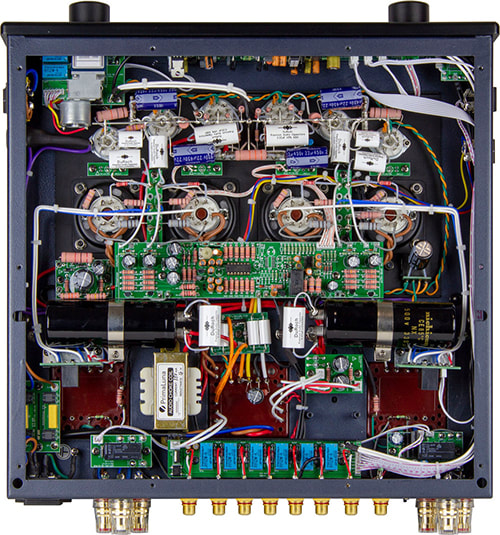 Do you have some classic rock albums you used to love so much that have now ended up left on the shelf, un-played for years? How about jazz or classical recordings from the 60’s? Every audiophile has albums that they used to play, but stopped because they are harsh, brittle, or bright. There is a solution.

Triode and Single Ended Triode (SET) amps are popular for their warmer, fuller, and easy to settle into sound. But triode amps have limitations! Ultra-linear has more extension on the top and bottom, not to mention greater power. They have greater “pop” with a bigger difference between light and dark, and loud and soft. Having triode only is VERY limiting.

The best option is to have both triode and ultra-linear. PrimaLuna engineers in Holland designed an ingenious circuit that lets you change from triode to ultra-linear with a push of a button on the supplied remote control. No need to get up and stop the music. Make an instant comparison while you listen and choose what you like best for that song or album.

Input selector switches leak noise and signals from other sources, as they never turn off the other inputs completely. And, they deteriorate with age, requiring the use of cleaners. Many are mounted on the front panel requiring long runs of wires to the back panel inputs. These wires pick up stray noise from RF and EMI.
​
PrimaLuna has a better way. Instead of a switch, input selection is done using premium quality sealed relays mounted in the rear where you plug in your components. When an input is selected, that relay closes giving you the best connection possible. All the other relays are left open, so noise and signals from other sources can’t leak in. The signal path is now almost non-existent, so there are no wires to pick up noise.

Tube life is simply a matter of how hard you run the tubes. That’s it. The only way to extend tube life is to run them as close to zero as you possible can, making sure it is not so low you go into crossover distortion. The life of a tube will depend on two things: Plate and screen voltage.

If the plate and screen voltage is high, you are more likely to get tube shorts when you turn the amp on and you get cathode stripping which greatly effects the cathodes ability to spit out electrons. Manufacturers that run the hell out of tubes to pump up their power ratings will never tell you what voltages they use. They’ll say it’s “proprietary” as if it’s some secret sauce. There is no such thing. But if they told you that they used 575, 600, or even 625 volts you probably wouldn’t buy. We proudly tell you our tubes run at just about 417 volts for the plates and screens.

PrimaLuna runs their output tubes at a minimum dissipation without going into crossover distortion. When you look at our amps, they provide less power from each tube. With KT-120’s as an example, a PrimaLuna will give you only 21 watts per tube. So running a pair of them you get 42 watts. That’s a lot of power, but the demands per tube are a fraction of some manufacturers that give you 100 watts from a pair of KT-120’s. It’s a cheap way to get big power, and it’s cheap. In fact, free. To get more power the right way is expensive. It requires bigger transformers, sockets, wiring, resistors, capacitors, and the tubes to do it. Which is exactly what PrimaLuna did. But we didn’t stop there.
​
Read this carefully: Power has nothing to do with sound quality. Or bass slam. You can buy a 200 watt receiver for $299, and it will even have surround sound. Do you think for a minute it will sound better than a 50 or 100 watts high end amp costing $10,000? Of course not. Only first-time buyers think that way. Experienced audiophiles know that for the majority of listening sessions, you use maybe 10 watts of power.

OUR AMPS ARE PERFECT. BUT YOUR SYSTEM MAY NOT BE

Ask any seasoned tube-head what the most musical output tube is and they will most certainly declare it the EL34. Other amp manufacturers would love to use it. Only PrimaLuna, through our proprietary output transformer designs, can give you EL34 midrange beauty with top-end air that goes on forever. And, bass extension with so much slam, our amps are used to power subwoofers.

However, every system is different. What if you bought a speaker with bass that overloads the room? Or, that is too dark? Or, too bright? What if you just want to have fun trying the different colors of sound from a vast pallet of tubes? With other manufacturers' products, you're stuck. They're a one-trick pony. How are you going to fine-tune your sound? Buy some different cables?!
​
With PrimaLuna, you get to choose. Go for it. 6L6G, 6L6GC, 7581A, EL34, EL37, 6550, KT66, KT77, KT88, KT90, KT120, even the monstrous KT150. A future-proof design, PrimaLuna is compatible with NEW tube types not even thought of today!